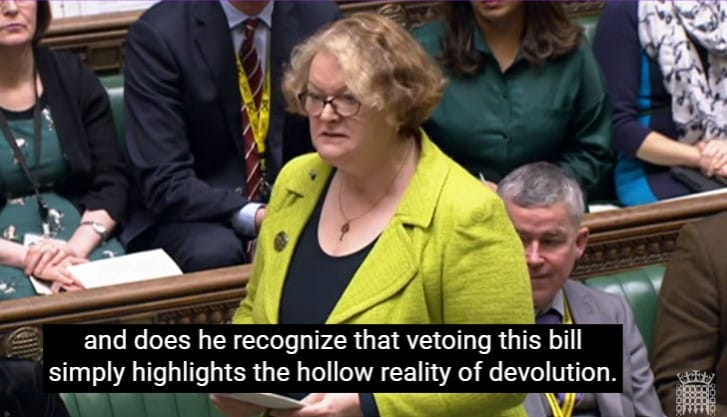 Vetoing this legislation is an unprecedented attack on the Scottish Parliament, which passed the Gender Recognition Reform Bill 86 to 39, including MSPs from every single party.

Gender recognition is a devolved policy area, and this does not change the 2010 Equality Act or give any additional rights to those with a certificate.

It shortens and simplifies the process and particularly ends the requirement for a psychological diagnosis of gender dysphoria.

This is in keeping with the guidance from the World Health Organization and UN, which recommends change to a legal statutory process based on self-identification.

This change has already been made by many countries over the last decade, including neighbors Ireland, Belgium, Denmark.

But this government is threatening to end UK acceptance of international certificates.

I find it bizarre considering the former Prime Minister, the Right Honourable Member for Maidenhead suggested a similar proposal in 2017.

So can the Secretary of State explain exactly which parts of the Equality Act are changed by this bill?

Why did he not raise specific concerns during the two consultations carried out by the Scottish Parliament, or in response to the Cabinet Secretary’s letter in October, rather than a response that came three days before the final debate on the bill?

What modifications is he suggesting to the bill that wouldn’t include a return to the outmoded medicalized process?

Why is he using one of the most marginalized groups in society to pick a fight with a Scottish Parliament?

Is he seriously. Is he seriously, after 300 years of different marriage ages and voting ages, suggesting there can no longer be legal or age differences north and south of the border,

and does he recognize that vetoing this bill simply highlights the hollow reality of devolution?

Sec of State for Scotland: Well, Mr Speaker, uh, the Honourable Lady won’t be surprised to hear that I don’t recognize very much of what she said as being correct, and I would point her to, I would point her to the Statement of Reasons, which will be laid alongside this order today, today, today. Which will, which, and it’s, and, and our legal advice is very clear.