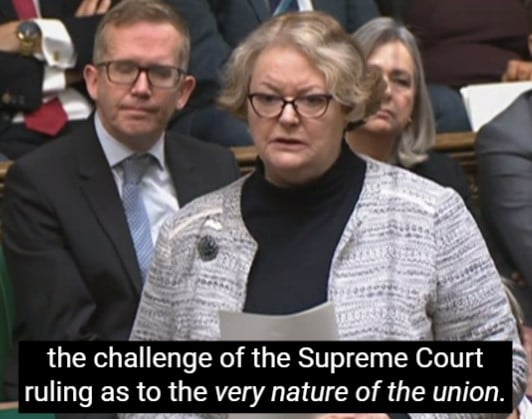 Yesterday, the United Kingdom in its current form turned 100 years old, but neither the Prime Minister nor the leader of the Labour party seemed to recognise the challenge of the Supreme Court ruling as to the very nature of the Union. The Prime Minister did not answer me two weeks ago, so will he clarify whether he still believes the UK is a voluntary Union? If so, can he explain the democratic route by which the people of Scotland can choose whether to stay in it or not?

Prime Minister: We fully respect the decision of the Supreme Court and believe strongly in the United Kingdom. As I said to the hon. Lady last time, we will work constructively with the Scottish Government to deliver for the people of Scotland.