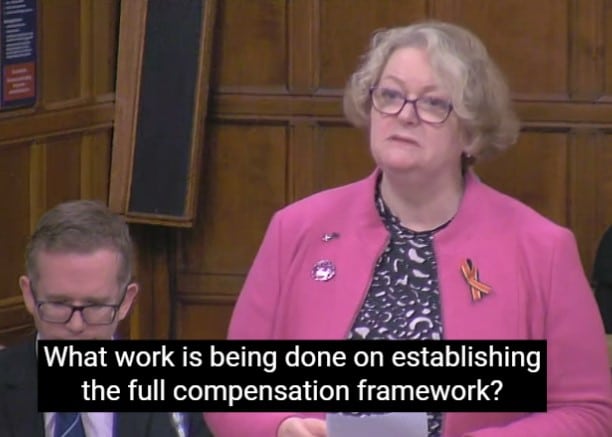 Thank you very much Dame (Angela) Eagle I’m delighted to serve under your chairmanship today.

I want to open by paying tribute to those affected by this disaster, those infected themselves, but also their families, those who have campaigned for years, either as infected people or in support of them. But also all those who have simply had their lives changed.

The energy it has taken to campaign for 50 years and still not even receive the limited justice that financial compensation can bring. The stigma they’ve faced, the loss of opportunities to work, to family, to have insurance. We’ve heard them all in detail and we can’t hear them today because this debate is simply going to be too short.

I think that it is important that we remember the 2017 debate, and I remember speaking at that time, I had been a surgeon for over 30 years before I came to this place, and in the eighties when this scandal began to leak out, I remember the impact that it had on me. I was shocked at the idea that trusting something that was signed off by a government or agency as safe, I might have transfused someone, to save their life, or maybe we were, you know, we were pretty profuse with blood at that time. I would say to simply deal with post-surgical anemia and I might have destroyed their life.

And that had a big impact on me – it changed my practice. I stopped using a scalpel; I started using organ assisted diathermy, and my theater staff would moan about how obsessional I was, about not having to transfuse patients by not losing blood in the first place.

Now the patients, all patients gained from that.

But if you were dealing with someone from a big car accident or had been stabbed or shot, you don’t have that luxury.

So blood transfusion is not something that clinicians can avoid, and I’m depressed that five years on from that debate, which led to the inquiry, we’re still only at this point. We thought that we would actually have been at a point of bringing this to an end.

Absolutely everyone in this chamber will welcome the completion of the evidence sessions, the interim report, and particularly the delivery of the interim payments to those infected or their bereaved partners.

But as has already been pointed out, bereaved parents and children are not included, nor those who may have been unpaid family carers who may not even fall into one of those groups, who have cared for years for someone, who is now deceased, and therefore they won’t even in the short term be eligible for care payments through an infected person.

So can the Minister tell us, I’m merely repeating what the Hon Member for Kingston upon Hull North has already said, but when will the registration of all those affected actually begin?

What work is being done on establishing the full compensation framework?

So as has been said, it is ready to go the moment the decision is made and when, when, when will the government publish its full response to the Sir Robert Francis report?

Because at the moment we are talking as if all those recommendations are accepted, the community are trusting they’re all accepted, but we don’t actually know that.

I would like to have seen a proper debate in the chamber. It warranted that; it warranted the full time so we could explore the detail.

I think it’s important we remember that in 2017, it wasn’t what any of us said in the debate that achieved the inquiry. That was agreed to in the morning because the Right Hon Member for Maidenhead realized it was going to be the first time they would lose a vote because of the cross-party strength of feeling.

It’s therefore important that all MPs in this chamber, all the supporters of this campaign, but in this house, continue to work cross party, as we’re seeing here, to make sure the government don’t drag their feet, and please deliver the justice that is long past time of delivering.

I am also a member of the APPG who has been part of the campaign throughout and took part in the tabling of parliamentary questions that were repeated ad nauseam to get a response. What was talked about in the Chamber was a response from the Government to the Sir Robert Francis report that would come at the same time as the publication—the reference was not to Sir Brian Langstaff’s call for interim payments nor to Sir Robert’s, but to the Sir Robert Francis report. The Minister must surely understand that given the 19 recommendations in the report, victims and their families want to know whether they can trust what is coming down the line. The idea of keeping them waiting for another seven or eight months is just cruel.

Alex Burghart: I understand what the hon. Lady is saying, but it is very important that Sir Brian’s findings are the final word on this matter and that the Government can respond to them as quickly as possible. The work that Sir Robert has done has obviously informed an enormous amount of work across Government to make sure that we can respond very quickly when the findings are produced in the middle of next year.

Not all of Sir Robert Francis’s recommendations are about the future and a final compensation scheme. Some relate to the support schemes that people are dependent on now. Why should action on those recommendations be delayed until the middle of next year when people face a cost of living crisis now? Surely if the Government responded to the more acute recommendations, saying they want to wait longer, would that not at least be a start?