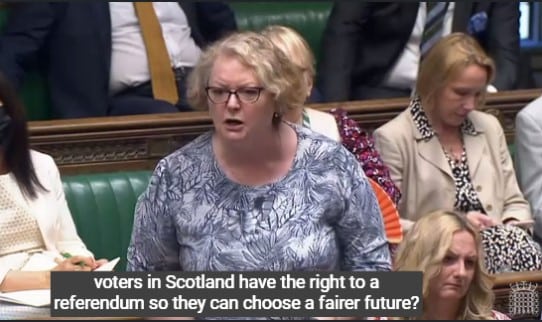 Philippa’s PMQ: Due to Scottish government investment in affordable housing, the Scottish child payment and extended free school meals, Scotland has the lowest level of child poverty in the UK in contrast to the Northeast, which has risen by 50% on the watch of this government.

In contrast, the Prime Minister took over a thousand pounds from the poorest families – so much for leveling up.

And those fighting to replace them have been falling over themselves to promise tax cuts to the wealthy.

So if the UK is meant to be a voluntary union, Does he not recognize that voters in Scotland have the right to a referendum so they can choose a fairer future?

PMQs response: Actually, Mr. Speaker, we increased the living wage across the whole of the UK, uh, by a thousand pounds.

And we made sure that people on universal credit. got their tax bills cut, by a thousand pounds. And, and we’ve in the last couple of weeks, we’ve cut, we’ve cut national insurance contributions by an average of 330 pounds. And it was because of the union that we were able to support families up and down the country, in Scotland, with the furlough and other payments to the tune of 408 billion pounds.