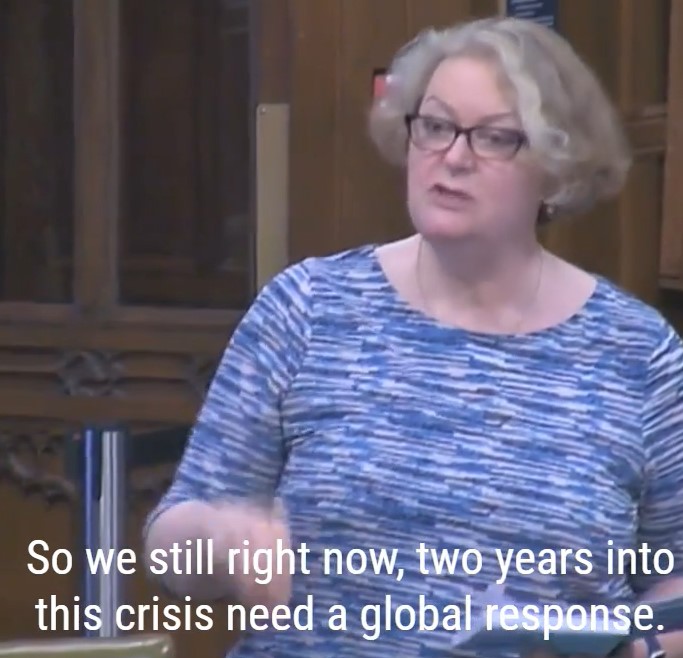 I spoke in a Westminster Hall debate on the need for the UK Government to urgently do more to enable global access to vaccines for COVID-19. A global response is essential.

Full text of my speech:

I want to declare an interest I’m chair of the all party group on vaccinations for all. And vice-chair of the Coronavirus all party group, where we’ve been taking evidence every fortnight since July, 2020, including hearing from health ministers across Sub-Saharan Africa and other places that emphasize what we’ve been hearing today, the difficulties they have in access, and also the poor quality of supply that they’re actually getting. It is certainly true that all of us have gained from the researchers who’ve developed new vaccines and I too pay tribute to the staff of the four NHS across the UK, for the speed and skill with which they have delivered it.

But we have vaccinated almost 80% of adults with a third or booster shot, when the access to even one shot in low-income countries is well below 10%. And that simply highlights what we mean by, in adequate access and inequity across the globe.

High-income countries have literally hoovered up the vaccines as they were developed over the last year. And that’s indefensible. It’s very reminiscent of aids. When people in Africa who were suffering from HIV or aids couldn’t access the treatments that were available in the richer countries.

The spring before 2020, I keep forgetting it’s a new year. We heard lots of warm words about a global response, to a global crisis. But that is simply not what we’ve seen. We have seen that COVAX was established and the UK government gave over 500 million pounds to it. It didn’t give any vaccines until quite late last year.

And what was meant to happen with COVAX is that they would procure directly from companies – that never happened. And therefore COVAX has ended up completely dependent on getting donated doses from countries that were wealthy and simply did advanced procurements. And that’s the reason COVAX has delivered less than half of the 2 billion doses it was aspiring to deliver last year.

The UK government promised a hundred million doses in June 2021 at the G7 -80 million to COVAX, 20 million bilaterally. There’s been less than a quarter of that, that has actually been delivered to COVAX. We are at the end of 2021, the hundred million is meant to be delivered by this coming June, which means 9.1 million a month to COVAX, a total of 11 and a half million if you include any bilateral donations. So the UK needs to radically step up donations of doses. And donations of doses are the acute response. Because that can be done in the short term. The UK has enough excess that it could carry out its third and indeed for many vulnerable patients, fourth doses, as I’ve had myself as an immunocompromised person.

And still accelerate the donation of doses to more than meet its target by June.

The problem is wealthy countries think they can protect their populations purely by vaccinating their own population. And Omicron shows that simply isn’t true. When you have large parts of the world, particularly in the global south with low access to vaccines, you will generate high spread. You will generate therefore more mutations, and eventually there will be new variants. And some of those variants may be as infectious as Omicron, may be as transmissible, may be as good at at escaping either natural immunity or previous vaccination. They may turn out to be much more severe. This fairy story that inevitably a virus is committed to becoming milder is something that we are not in a position to count on.

So we still right now, two years into this crisis need a global response. And I therefore would call on the government the need to accelerate the donations, using the excess that we have. But these do need to be predictable. They need to be in collaboration with the low-income countries that are receiving them and they need to have a decent shelf life.

We heard of ministers having to visit the ports every day in case something had arrived. Having to keep stopping their own programs because suddenly they get a delivery that’s got a few weeks left on it. So that is disrespectful to countries that do not have the health infrastructure that we have across the UK.

It is critical to include consumables like syringes, needles. It’s also important to try and support the wider COVID-19 responses. If you look at the WHO data, you will notice the incredibly low levels of COVID supposedly in Africa. Africa does not have low levels. They have low levels of access to tests, and therefore the cases are not being registered. And we shouldn’t be using these doses as part of the already reduced ODA budget and certainly not charging them as more than the UK government has paid for them.

That’s the short term approach, but the medium term approach is to massively increase global production. And the problem is the TRIPSwaiver has been being discussed basically for over a year.

We’d be in a totally different position if that had been moved on at the beginning.

The UK is one of a dwindling number of countries, which is blocking it -over 130 countries now support it. And it is important to recognize that most of the leading COVID-19 vaccines have indeed been developed with public funding, either from university settings, which are largely publicly funded or through the huge injections by the UK government, the US government, the EU governments and others.

It is important when we touched on polio, to think about the fact that Salt didn’t patent his vaccine, Alexander Fleming didn’t patent penicillin, Röntgen didn’t patent x-rays because they saw them as part of the global good.

As well as getting rid of the blockage of intellectual property rights and patents,

it’s important that there is proper sharing of data and technology transfer. But MSF have identified a hundred companies across Africa, Asia and Latin America, which are certified by the EMA, by the FDA or the WHO on good manufacturing practice. So to imply that it isn’t possible to produce vaccines to high quality in the global south is frankly insulting.

And messenger RNA vaccines hold a whole hope in the future for many neglected, tropical diseases, such as TB, such as malaria and others because of the technology. So by sharing that technology, now, it isn’t just about dealing with COVID-19. It actually opens up the ability to tackle the scourges of infectious diseases that many countries face.

The other thing is that the UK should be increasing production, to become a net exporter instead of importer. And therefore it is absolutely inexplicable why the UK government pooled funding from the Valneva production site in Livingston, when the trial data was about to be published. That was successful.

And as has been mentioned, because it’s a very traditional whole virus approach. There may be people who have been unwilling to take the messenger RNA vaccines, who would be willing to receive the Valneva vaccine. Because it’s whole virus, it may, and this has not yet been trialed, also provide a broader reaction

that may therefore remain viable, even when other variants arrive. What we’ve seen is that Omicron in comparison to Delta, which had four mutations on the spike protein Omicron has 32, it’s a totally different shape. And therefore, sadly, the AstraZeneca vaccine simply the key no longer fits the lock.

Pfizer does. But it wanes. We need to have broader vaccines so that we might be a bit more resistant to, to variance in the future.

It’s also important for the government to maintain the support for routine vaccination. And that means honoring the replenishment commitments to Gavi because routine vaccinations have suffered due to the disruption of the pandemic.

And it’s important that UK has always been a leading funder of vaccination and they mustn’t now pool back. But also to think about future pandemics, the replenishment of Sepi, the epidemic preparedness initiative is coming up this year. The UK needs to commit to that. We are all talking about humanitarian and the moral need to support people in poor countries to have the access we’ve had..

But on top of the lives lost and the huge multi-trillion economic hit to the world, it is important that we recognize that this was a global challenge. The international community so far has failed. It doesn’t hold great hope for that other challenge of climate crisis if we can’t get our act together now in facing this.