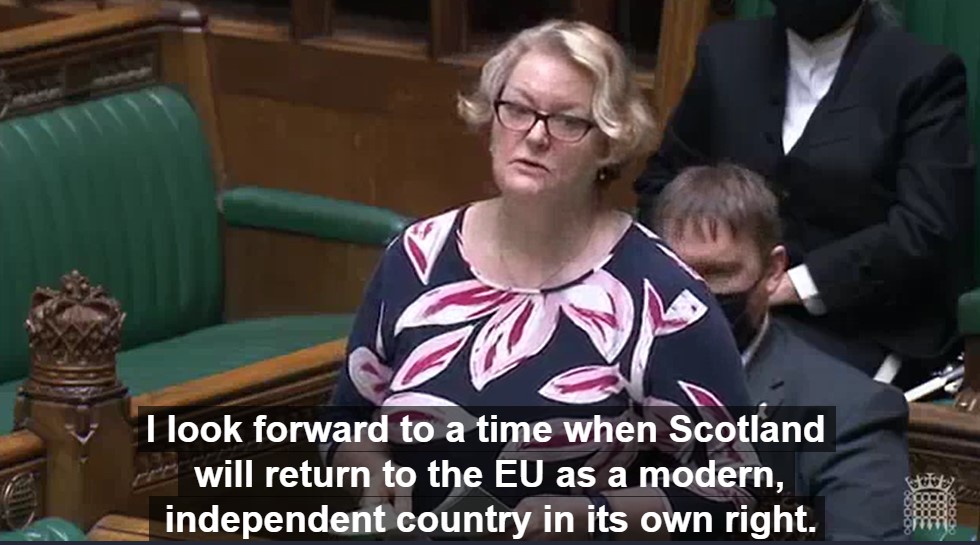 Will the Government accept the need to consider including representatives of the devolved Parliaments?

We have already heard a discussion about how to secure the representation of not just one view but all the views from Northern Ireland. However, Scotland and Wales are also massively impacted by Brexit.

I look forward to a time when Scotland will return to the EU as a modern, independent country in its own right.

I welcome the news that the Parliamentary Partnership Assembly will, hopefully, heave into view in the next few months. The aim is to create a working relationship between the United Kingdom and the European Parliament, to look at the impact of the trade and co-operation agreement, and to be able to make representations and recommendations to the Partnership Council to improve its implementation. That means that the make-up of the assembly will be critical in recognising and, indeed, trying to tackle the differentiated impact of Brexit across the four nations of the UK.

Will the Government not therefore accept the need to consider including representatives of the devolved Parliaments? We have already heard a discussion about how to secure the representation of not just one view but all the views from Northern Ireland. However, Scotland and Wales are also massively impacted by Brexit, and I welcomed the speech of Sir Oliver Heald, who did at least consider how that inclusion could be achieved.

Perhaps when the Leader of the House sums up the debate, he will explain to us what consultation has been carried out with the devolved Parliaments— particularly Northern Ireland, obviously, but, as I have said, Scotland and Wales have also been massively impacted by Brexit, and the impacts differ according to local economies, cultures and demographics. It is important that all those voices are gathered and represented.

The chair of the delegation will obviously be a very important figure, and, according to the documents, should be elected at the first meeting. It is vital that this is not a Government anointment of the kind that we have seen in some of the important Select Committees. We are talking about a parliamentary delegation, not an intergovernmental delegation.

A key role of the assembly will be trying to repair the relationship with our European neighbours, which is at rock bottom. The brinkmanship that we have seen over the last year, and repeated threats to the Northern Ireland protocol—a deal that the Prime Minister was quite happy to claim as his own personal breakthrough in the run-up to the 2019 election—have undermined trust. We often hear that with trust, many of the issues surrounding the protocol could be eased, but—with a German husband, and having watched German media and heard the views of Germans about what has happened here—I know that trust is now utterly absent when it comes to whether the UK will keep its word on anything in the future, which makes it likely that moving forward through the challenges of the next few years will be very difficult.

Unfortunately—particularly if meetings are only going to be six-monthly—what the assembly simply cannot replace are the myriad interactions, formal and informal, between officials, between experts, between Ministers and between Heads of State that used to happen when the UK was a member of the EU. They were able not just to influence policy but, often, to defuse tensions. It should not be forgotten that the interactions on neutral ground between John Major and Albert Reynolds made possible a relationship, indeed a warm friendship, that allowed the UK and Ireland to work together and reset the British-Irish relationship in the early 1990s.

As a Scottish MP, I will obviously be speaking up about the impact of Brexit in Scotland, which I see in my own constituency and my colleagues see throughout Scotland in all our sectors: in fishing, in farming, in the NHS, in social care and in tourism. It is important that we speak up for the majority of voters in Scotland, who frankly did not want Brexit and still do not want it. I look forward to a time when Scotland will return to the EU as a modern, independent country in its own right.