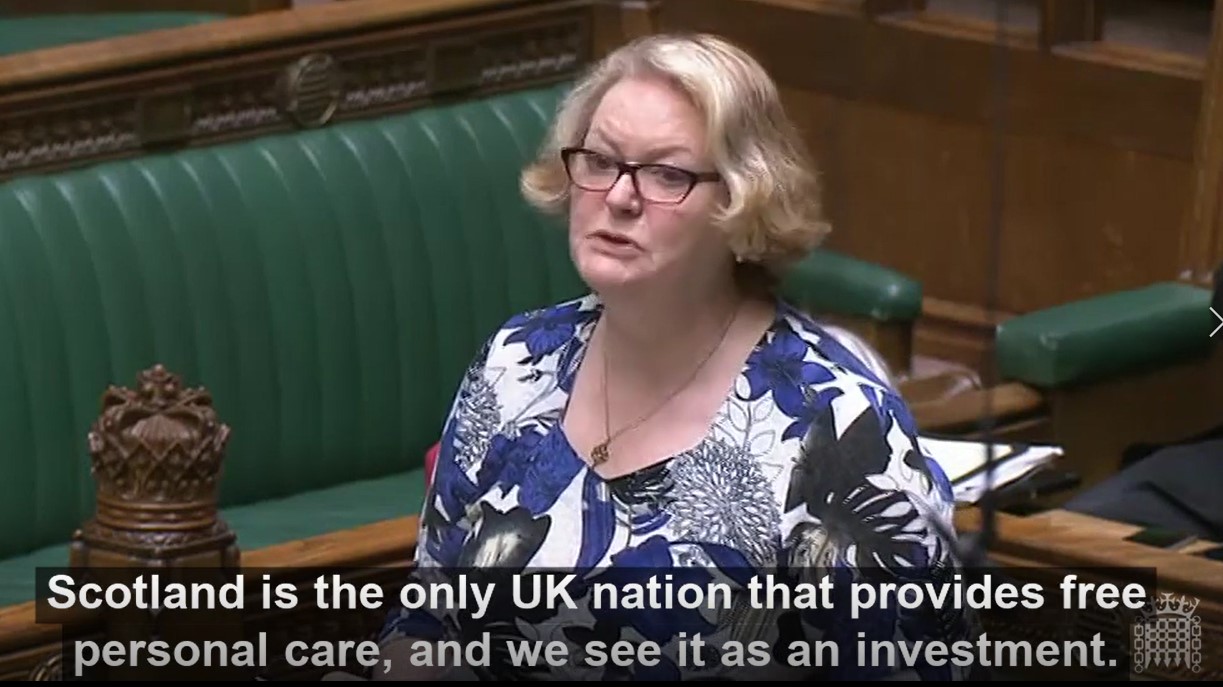 Tory Government’s Care Cap only applies to Personal Care (washing & dressing etc) which has been provided free in Scotland since 2002. So the Scottish Government’s Free Personal Care (provided in care homes or at home) clearly valued at £86,000 per person!

I initially want to touch on new clause 49. Like other members of the Bill Committee, I sat through hours and hours from September to November, and the Government have suddenly pounced on us with this at the last minute. It is such a complicated new clause, but it has not been interrogated.

It is quite clear that the Government’s original spin that no one would pay more than £86,000 for social care and no one would have to sell their house is completely misleading. All the accommodation costs are on top of this. As has been highlighted in the media and by Members in the Chamber, those with assets of about £100,000 will not see any real gain from this policy, while those sitting on assets of £500,000 or more will keep a lot of their wealth. That means it exacerbates the differences, and penalises those in the north of England and areas where house values are not so high. Basically, it is feeding the frenzy down here of people sitting on over-inflated house prices. As has been said, this is not levelling up, just doubling down.

The cap applies only to personal care, which means things like washing and dressing. That has been provided free in Scotland both within the care home and in home care since 2002. It was expanded in 2011 to provide more hours so that people with greater need could stay at home longer, and it was extended to those under 65 with care needs in April 2019. Scotland is the only UK nation that provides free personal care, and we see it as an investment. It is an investment that we spend 43% more per head on social care in Scotland, but it is an investment in people’s independence and their inclusion in society. The problem is that we spend far too much time talking about social care just as a burden, instead of actually seeing it from the point of view of the user.

The Scottish Government have already added an extra penny on taxation for medium and high earners to cover things such as our wellbeing policies, health or social care, but this Government’s plan to increase national insurance contributions will disproportionately hit low-paid workers and young workers. I would say that the biggest weakness of all, as we know from the original debate on the national insurance change, is that the funding is not going to go to social care initially; it is going to go to the NHS, yet it is social care that is in crisis. This is what is causing the pressure in accident and emergency, because people who are ready to be discharged simply cannot be, as the care support is not there. I do not think that this fixes the problem. There will actually be very little money, because a lot of it is going to go on capping the overall payment. I do not see social care benefiting from this at all, yet it is social care that needs investment more than anything else.

Turning to the main substance of the Bill, which is meant to some extent to unpick the damage and fragmentation of the Health and Social Care Act less than a decade on, I wish to express support for amendments 9 and 72. Many in the NHS, including me, will be glad to see the back of section 75 enforced tendering. Others in the Chamber know that it was the Health and Social Care Act that brought me into politics, as I just could not believe anybody thought what they were doing was a good idea. It is still clear from the pandemic that this Government are absolutely wedded to outsourcing services to private companies, and to the flawed notion that financial competition somehow drives up clinical quality. I am sorry, but that simply is not the case. As the Chair of the Health and Social Care Committee has highlighted, we have to focus on safety, on clinical audit, and on peer review if we want to drive up care quality for patients, not just on the money in the system.

The Government appear to have conceded that integrated care boards should be statutory bodies, as health boards have always been in Scotland, but partnership boards can include private providers, such as with Virgin Care in Bath. As the partnership boards will be involved in devising the local strategy for health services, that is likely to lead to a blatant conflict of interest, and I do not see a resolution to that. The NHS simply should be the presumed provider of health services. That is not just, as the shadow Health Minister said, because the NHS is in it for the long term, or for a quick contract, but because the NHS provides the training to nurses and doctors who are the vital workforce of the future. Private providers do not do that; private providers largely live off the NHS. As well as not training staff, where there are major problems or complications, patients inevitably end up in the intensive care unit of an NHS hospital.

In conclusion, for all the size of the Bill, and the scale that the reorganisation will involve for staff in the NHS, who we all know are frankly exhausted, the Government have failed to take the opportunity to repair fully the damage of the Health and Social Care Act 2012, and to recreate in England a unified public health system, such as the one we are lucky enough still to have in Scotland.