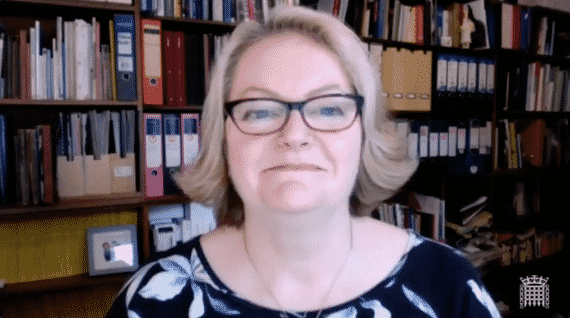 I asked the Health Secretary if the UK Government are planning to tighten internal UK travel restrictions to stop the spread of the new South African variant of Covid. It comes almost a year after I raised the issue of border health controls right at the start of the pandemic. With the UK still only planning hotel quarantine for a limited number of countries, from which travel is already banned, the Scottish Government is now considering introducing tougher measures here to stop new strains and variants coming into the country as happened last summer.

I also asked whether the UK Government would increase random genomic testing of PCR specimens to identify how widespread this new variant already is.

In response, the Health Secretary claimed the UK Government set up genomic testing across the UK in the face of Covid. However, Scotland has had a National Genetic Service for years and began the Scottish Genome Partnership in 2015.

Finally, I asked whether the UK Government would tighten minimal quarantine restrictions to prevent the spread of new foreign Covid variants. Countries like Taiwan and Hong Kong use quarantine hotels and designated taxis to avoid Covid spread on public transport and to prevent transmission of new variants.

You can watch my full contribution to the statement here: https://www.youtube.com/watch?v=nCLdmbtx7XY

I associate myself with the Secretary of State’s comments on HIV test week, but it is concerning to hear that over 100 cases of the South African variant have been detected in the UK, particularly as they do not represent a single outbreak, but are widely scattered across England. The concern, of course, is that while current vaccines will still give a significant degree of protection, this variant’s resistance to some covid antibodies could reduce their effectiveness, so does he plan to tighten internal travel restrictions to avoid it spreading across the UK as happened with the Kent variant?

Will there be increased random genomic testing of PCR specimens outwith those areas to identify just how widespread it already is? Unfortunately, this is shutting the barn door after the horse has bolted. The Government have been aware of the concern about this variant for some time, and the SAGE advisory group warned that limited travel bans would not be enough to keep out new covid variants and that the only way to stop them would be mandatory quarantine for all arrivals, so why did the Government choose not to follow that advice? This variant is already present in many countries and new, more resistant covid variants could evolve anywhere in the world, so will the Government reconsider their very minimal quarantine plan and extend it to all incoming travellers? As new strains brought in through holiday travel last year contributed to the second wave of covid, is the Prime Minister seriously suggesting that people should go abroad on holiday this summer?

What the SNP spokeswoman failed to mention is that it is only because we built the huge genomic surveillance capacity that we now have, which is available right across the UK, that we have been able to spot these variants of concern. This is a critical point, because those sorts of variation happen everywhere, but the challenge is to spot them as soon as we can and act on them.

The hon. Lady asked about travel. We already have in place rules against all non-essential travel, with clear “stay local” guidance. We also have mandatory isolation for new arrivals, so yes, we have tightened in response to the new evidence that she mentioned, but she did not also mention the fact that it is only because the vaccine programme is rolling out so rapidly across the whole UK that we are able to protect people against the old variant, which of course is the most widespread, in combination with the variant discovered in Kent. That is the way that we will get out of this situation. It is a UK programme, and we are enthusiastic and willing, from the UK Government point of view, to do everything we possibly can to support that roll-out, including all the way across Scotland, to make sure that people in Scotland and every other part of this United Kingdom can get their jab as soon as possible.