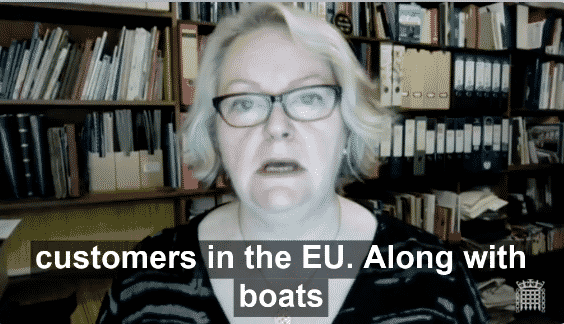 Following the chaos that has hit our fishing industry when trying to export since the start of the year, this week in Parliament I raised the problems experienced by the local fishing communities in my constituency suffering as a result of the new EU Trade and Co-operation Agreement.

85% of the seafood caught by my local fishing fleet is sold into the EU. Bureaucratic chaos resulting from Brexit means they have been unable to sell to their usual markets and their boats are currently tied up. Logistics firms will not accept any more catch because of the current customs chaos. The situation is similar across much of Scotland and the UK.

During this week’s Committee for the Future Relationship with the EU public evidence session, I highlighted these issues to representatives from relevant stakeholders: Make UK, the British Retail Consortium and the Food and Drink Federation.

You can watch my full contribution to the Committee for the Future Relationship with the EU Select Committee here: https://www.youtube.com/watch?v=FnIDwBTE0no

I also asked the UK Secretary of State for Environmental, Farming and Rural Affairs what financial support the UK Government would provide to this struggling industry and how he planned to the resolve issues he previously described as ‘teething problems’.

You can watch my full contribution to the urgent question session here: https://www.youtube.com/watch?v=yu1mAcf-YqE

Far from promises of a ‘sea of opportunity’ and ‘taking back control’, the stark realities of Brexit are being felt hard by fishing communities in Central Ayrshire and beyond.

Eight-five per cent. of the seafood caught by my local fishing fleet goes to customers in the EU. Along with boats right across the UK, they are currently tied up, as logistics firms will not accept any more produce due to the current customs chaos.

Can the Secretary of State explain how he plans to resolve what he dismisses as “teething problems” and clarify what the Prime Minister meant when he talked about financial compensation for their losses?

We are working closely with the industry and DFDS to identify what we can do to address some of the problems that have been encountered.

I am aware that late last week, DFDS suspended the groupage service that it was offering to smaller consignments and has focused on single larger consignments, particularly of Scottish salmon. I understand that it believes it has sorted out some of those problems and intends next week to resume some of those groupage consignments.

There is a challenge here: in a group of several consignments, maybe three people would have got the paperwork right, but if one person has not, that can cause issues for everybody. We need people to pay attention to the detail and to get that paperwork right. We are working closely with the industry so that it can acclimatise itself to this administrative process.