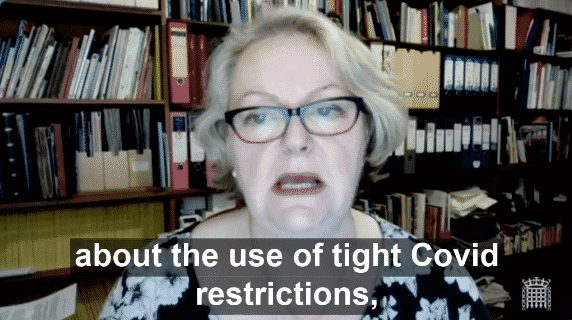 This week I participated in the Public Health debate concerning the implementation of new Covid restrictions.

As the third wave of Covid intensifies and we are back under lockdown, it is critical the UK Government agree to a ‘Zero Tolerance’ approach to community transmission, as sought last summer by the three Devolved Governments.

It is also crucial that the UK Government restrict international travel both too and from the UK.

Only by following such a strict approach will our domestic economy and society eventually be able to open up fully and safely as we have seen in countries like New Zealand, Singapore and South Korea.

The impact of new restrictions will be tough on families and businesses who will need financial support to get through it and so it was hugely disappointing to hear that the £375 million of support for businesses in Scotland promised by the Chancellor has since been rescinded.

You can watch my full contribution to the public health debate here: https://www.youtube.com/watch?v=7Qx8FeTZmkk

A year ago, when the SARS-Cov-2 virus emerged, there was no handbook on covid. All Governments had to feel their way, but there is little excuse for repeating the same mistakes a year on. “Go early and go hard” has been public health experts’ consistent advice. Michael Ryan of the World Health Organisation said at the start of the pandemic:

“The virus will always get you if you don’t move quickly”.

Yet just last week, the Health Secretary still refused to put England into tier 4, despite surging case numbers and the devolved nations already being under tight restrictions since Christmas.

After the late lockdown in March and rushed reopening in May, the Government allowed rates of infection in England to run seven times higher than in Scotland or Northern Ireland over the summer, and at the time, chose not to agree a zero-tolerance covid policy to eliminate community spread of the virus on a UK-wide basis. The gains of lockdown were gradually lost, as eat out to help out drove up cases in August and September, thus beginning the second wave.

The UK is one of the few countries that never closed its borders and many new strains of covid were imported by people travelling to Europe on summer holidays. Even now, in the middle of the second wave, the UK does not have strict testing and residential or monitored quarantine for arrivals. On the contrary, the Government have sought to grant further exemptions from quarantine rules.

In September, the Prime Minister ignored the tenfold rise in covid cases and his own advisory group to listen yet again to the proponents of disease-driven rather than vaccine-based herd immunity, leading to a six-week delay in instigating the autumn lockdown. Herd immunity can be safely achieved only through the use of a vaccine, and even then, only if the vaccine prevents transmission of the virus and thus also protects the unvaccinated. That is the hope, but we do not yet know if either of the vaccines used in the UK will achieve that.

It is understandable that Governments are wary about the use of tight covid restrictions and their impact on our economy and society, but it is a false dichotomy to set public health against the economy and lives against livelihoods. People simply choose not to endanger themselves or their families and need to have confidence that the risk of catching the virus is very low. Allowing increased levels of spread—and, therefore, high rates of viral replication—also contributes to more frequent mutations, and increases the risk of generating yet more problematic new variants.

With cases growing exponentially, it simply is not possible to vaccinate our way out of the current surge so I welcome the decision for this lockdown, but it is tough on everyone, and both individuals and businesses will need support to get through it. That is why it is bitterly disappointing to hear that the £375 million of support for businesses in Scotland promised by the Chancellor just yesterday has now been rescinded, leaving Scotland with no new funding to deal with the economic impact of the current shutdown.

The Government must also consider what strategy they will follow at the end of the lockdown. It should be maintained long enough to achieve suppression of community transmission and to establish a more systematic approach to test, trace and isolate. It is critical to provide both financial and practical support to those who need to isolate, as it is only isolation that actually breaks the chains of infection.

Strict controls at external borders would avoid importing more covid cases and new variants. Such a covid-secure approach would allow the domestic UK economy to reopen fully, with the Government then able to target financial support at the industries associated with international travel, such as aviation and aerospace, which have been so badly impacted by the pandemic. Countries such as New Zealand, Singapore and Korea, which have tight travel restrictions and quarantines, have eliminated community transmission and been able fully to open up their economies and societies, including schools, hospitality and domestic tourism. We only have to look at their Christmas and new year celebrations to see what could be on offer to us here if we get things right.