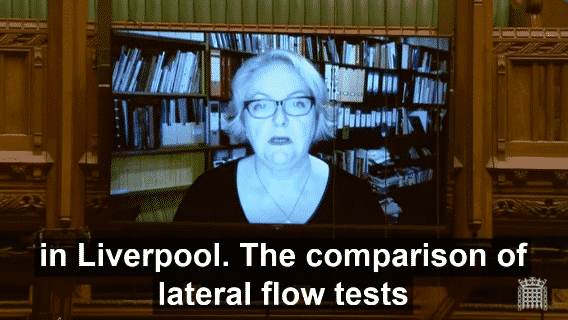 I asked the UK Secretary of State for Health whether spending £43Bn on inaccurate lateral flow tests instead of improving access to proven PCR tests was a worthwhile investment. We know that lateral flow tests miss over half of positive Covid cases. They also miss 30% of cases with a high viral load.

He responded in a typically rude and patronising manner. As a Doctor for 38 years, of course I’m not against testing, as he suggests, but tests which miss over half of Covid cases creates dangerous false reassurance.

You can watch my full contribution to the statement here: https://www.youtube.com/watch?v=FWEKk5Pj3m0

Many public health experts have questioned the use of Innova lateral flow tests for mass community testing, especially as the manufacturer does not recommend them for detecting coronavirus in people who are asymptomatic. The Secretary of State must be aware of the paper from the University of Liverpool, based on his own Department’s quality assurance programme, which has raised serious concerns about their accuracy when used in the community testing project in Liverpool. A comparison of lateral flow tests with PCR tests in over 3,000 people revealed a sensitivity of just 48%, meaning that more than half of those with the virus would be falsely reassured that they were negative. The test even missed 30% of those with a high viral load—those most likely to be infectious.

I understand the wish to use quick tests for case finding, but surely the Secretary of State should now delay rolling them out to 67 other local authorities and should not proceed with plans to spend £43 billion for a test that is so inaccurate. Would it not be better to focus funding on easier and quicker access to PCR tests? With more than half of all positive cases being missed, does he accept that despite the proposal by Baroness Harding, these tests cannot be used to release people who are contacts from isolation? On the basis of that study, the Liverpool health protection board has abandoned plans to use lateral flow tests to check visitors to care homes, so will the Secretary of State be recommending that local authorities and providers should return to PCR testing for care home staff and family visitors to reduce the risk to the most vulnerable residents?

I think that this argument against testing is wrong. I think that we should test, test, test, and that is what this Government are doing. We are working very closely with the Government in Scotland, from the same party that the hon. Lady represents, to make sure that we use testing as widely as possible to find people who have this virus. Yes, of course different tests have different characteristics. The lateral flow tests find around 70% of those who are infectious. That means that if we test people who would not otherwise have been tested, we find the positive cases, we can get them to isolate and we can break the chains of transmission. I strongly urge the hon. Lady to go back, to study the details and to back the testing programme that we have in this country.