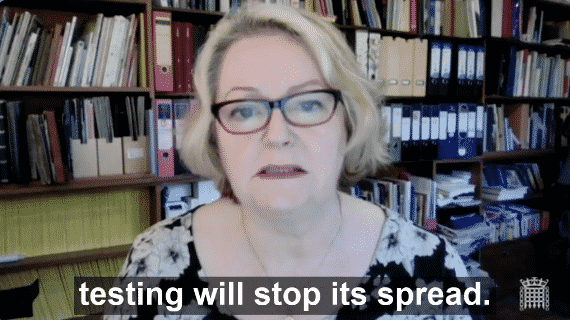 As chair of the All-Party Parliamentary Group for Vaccinations, I welcome the news about the roll-out of the Pfizer Vaccine.

But, as well as undertaking a public campaign to encourage uptake of the vaccine, the UK Government must provide more support for those Covid contacts asked to isolate. As the roll-out of the vaccine will take time, the pre-existing ‘test; trace; isolate; SUPPORT’ system must be improved.

I asked the UK Secretary of State for Health when the formal assessment of the mass testing pilot in Liverpool will be published. The UK Government’s announcement of putting out £40Bn in tenders of contracts to expand the approach undertaken in Liverpool has not been matched with supporting scientific evidence. Given Liverpool was in lockdown prior to the start of the pilot, we still don’t know how successful the mass testing pilot has been in tracking and isolating all Covid contacts.

You can watch my full contribution to the statement here: https://www.youtube.com/watch?v=sCW4np7jLgk

As chair of the all-party parliamentary group on vaccinations for all, I welcome the authorisation of the Pfizer vaccine and echo the shadow Secretary of State’s call for a public health campaign to encourage uptake. It will naturally take some time before the vaccine is widely available, so we all still need to stick to the rules and ensure that we can test, trace, isolate and support all those carrying the virus.

Last week, the Secretary of State claimed that the pilot project of mass testing in Liverpool was responsible for driving down cases, despite the city having been under lockdown for much of the time. Lateral flow tests miss up to 40% of cases, so the Government’s plan to use them to free people from isolation are causing concern among many public health and screening experts. When will the formal assessment of the pilot be published, and how can he justify already putting out tenders for £40 billion-worth of contracts to extend that approach without scientific evaluation? Would it not be better to invest some of that money in getting the traditional test, trace and isolate system working properly? Six months on, the Serco and Sitel system has still not improved, and over 40% of contacts in England are still not being informed that they should be isolating.

The Secretary of State does not often talk about it, but he knows that it is not testing but isolation that stops the spread of the virus, so if people who are carrying the virus are not isolating, no amount of mass testing will stop the spread. When I raised the King’s College London report last week which found that less than 20% of cases and only 10% of contacts were isolating, the Secretary of State claimed that the Government have data showing much higher compliance. Can he tell us the figures for isolation rates for those with covid and their contacts? People will not stay off work if it means that they cannot feed their family, so is he concerned at reports that many requests for the isolation payment are being refused? How will he ensure that those carrying the virus are financially supported to isolate and reduce its spread?

The hon. Lady says that I do not talk about contact tracing very much. I was literally answering a question on contact tracing just before her question—I talk of little else. We are publishing further data tomorrow on contact tracing, precisely in response to the question that she asks. She will see that the continued improvement of our contact tracing across the country is advancing further. I cannot say any more than that, because the figures are not being released until tomorrow.

The hon. Lady asked about scientific evaluation. We are constantly scientifically evaluating the work that is going on, especially in Liverpool. That is one of the things that the scientists who work as part of my team, in NHS Test and Trace and in Public Health England do. It is a matter of constant scientific evaluation, but we will not wait until ages after something has finished to do an overly long evaluation. We have to evaluate as we go along, because we are constantly trying to improve the response to this pandemic, and we are constantly trying to learn. I urge her to support the approach of constant learning and constant improvement. We will have to do that through the roll-out of the vaccine too.