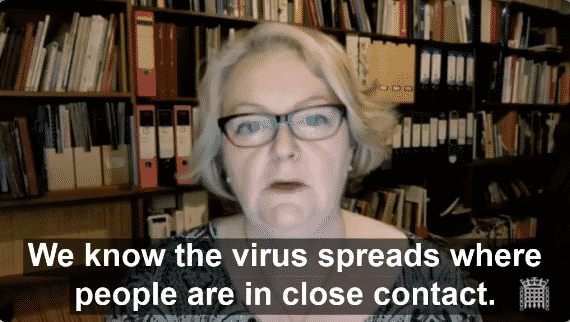 I asked the UK Secretary of State if he thought it was inappropriate for politicians in well-paid jobs to suggest rising Covid cases in certain areas is due to “misbehaviour”. Perhaps instead more support should be provided for those on low-incomes who are required to self-isolate as they can do the right thing.

Research shows that social deprivation is a driver of Covid spread and financial hardship means many people can’t afford to isolate. Yet millions of low paid workers will lose 1/3 of their wages or, like the ExcludedUK, get nothing at all!

While there may be a small minority who do not think of those around them, the majority of people try to follow the advice to reduce the spread of covid. We know that the virus spreads where people are in close contact. This is about not just pubs and nightclubs; it includes those in overcrowded housing, those in exposed jobs where working from home is not an option, and those on zero-hours contracts who simply will not get paid if they are not working. Does the Secretary of State not think it is a bit inappropriate for politicians with well-paid and secure jobs to suggest that rising covid cases in certain areas are just due to some form of misbehaviour requiring tougher penalties?

People want to do the right thing, whether due to restrictions or because they are infected themselves, but sometimes they feel that they have no option but to continue going out of the house. Although in general surveys the vast majority of people say that they would isolate if they caught covid, a study from King’s College London shows that less than 20% of those who develop symptoms go on to isolate. That was associated with financial hardship, social deprivation, having dependent children and working in key jobs that cannot be carried out from home. Why is the Chancellor not continuing the full furlough scheme when we are heading into a second wave and the hardest winter that the NHS will ever have faced? There are still millions of people who have not received any support since March. Does the Secretary of State not recognise that, for those on low wages and in insecure work, the choice between staying at home and feeding their family just does not feel like a choice at all?

I agree with the hon. Lady that the majority of people try to follow the advice, and that the vast majority of people want to do the right thing. We introduced the £500 payment for those on low incomes precisely to support people to do that. We introduced it right across the UK, working with the Scottish Government, and there are signs that the uptake of that has allowed people to complete isolation when they need to, in order to keep others safe.

You can watch my full contribution here: https://www.youtube.com/watch?v=qfX5z3qDkbg