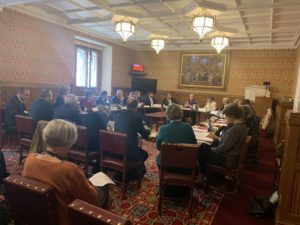 I was delighted to host this roundtable event, along with Baroness Walmsley, on 7th May for the General Medical Council, exploring the issue of bullying in health systems, the danger it poses to patient safety and staff well being, and how to tackle it.  We had participants from all across the UK, with representatives from the Royal College of Surgeons, the British Medical Association, the Doctors Association UK, as well as the Deputy Chief Medical Officer for Scotland

Bullying in the NHS is commonplace and, as a surgeon in the NHS for over 30 years, I have long been aware of the issues that surround it. I, myself, was subjected to bullying when I started my career. I was one of the only female surgeons in Scotland and was told multiple times that I wouldn’t make it and regularly faced comments about my gender.

During the meeting, we looked at various initiatives taking place across the UK and considered options which Governments and healthcare stakeholders might adopt. With regards whistle-blowing, it is clear that bullying is a common response to health professionals who raise concerns, it is also a danger in any organisation which is as hierarchical as the NHS. While it is important to change the law to provide greater protection and support for Whistle-blowers, it is also important to change the culture and strengthen team working. Some hospitals used to be well known for ‘teaching by humiliation’ and I saw bullying habits of more senior consultants being passed to junior doctors.

It is difficult to make good clinical decisions if your ability and authority is being undermined, and that puts patient safety at risk. It is crucial to have an environment where everyone feels respected and part of a team – that way the focus can be on caring for the patient. This was central to the innovative changes introduced by the Scottish Patient Safety Programme in 2008, which got operating theatre teams to use first names to break down the hierarchy, so everyone would feel empowered to speak out if they thought a mistake was about to be made.

Back in November, I hosted a similar event – ‘Learn Not Blame’ – on the issue of how to learn from whistle-blowing in the NHS, which was organised by the Doctors Association UK. Although a culture change is required, this can be done facilitated through the adoption of simple suggestions, such discussing the issues earlier on in doctors’ careers, perhaps starting at university. In many cases, those of accused of bullying are not aware they were bullying, and often an open conversation between those involved can quickly resolve the situation. 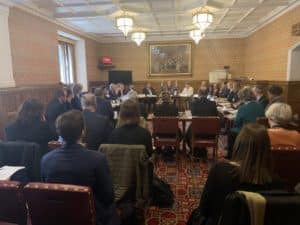