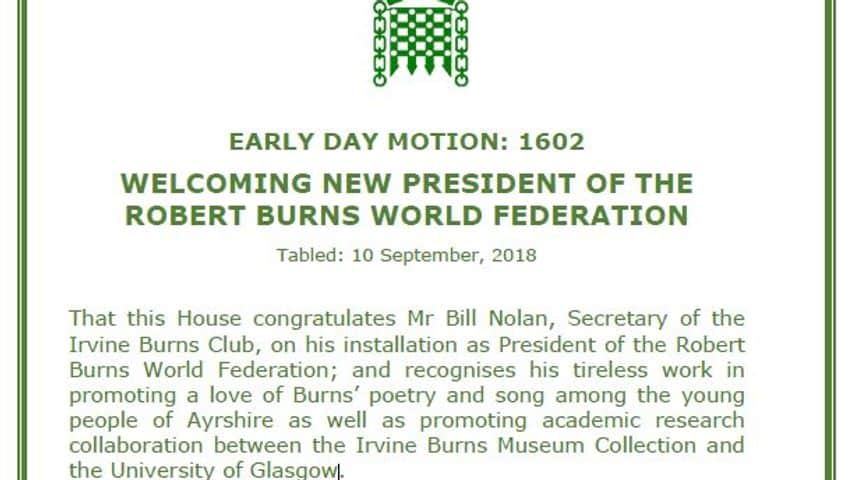 I have submitted a Parliamentary Early Day Motion (EDM) congratulating Bill Nolan, Secretary of the Irvine Burns Club, on his installation as President of the Robert Burns World Federation (RBWF). It is a great honour for both Bill and the Club, and  very well deserved given his work as Secretary of the Club and in promoting a love of Burns’ poetry and song. Bill is the fourth member of the Irvine Burns Club to become President of RBWF whose aim is to advance the education of the public about the life, poetry and works of Robert Burns. I have no doubt Bill will carry out his new role with aplomb and I wish him well in his duties over the coming year.

I was delighted to be invited along to the Portal to celebrate his installation on 8th September. It was a great night with over 150 guests in the large sport hall which had been given a very impressive makeover for the evening. While it is undoubtedly a great honour for Bill himself, who works tirelessly to promote a love of Burns among our young people, it also brings great recognition for the Irvine Burns Club and the whole town.

For those of you unacquainted with the Club, they can be found at the Wellwood Burns Centre and Museum on Eglinton Street, which is home to the very chair in which Robert Burns sat in the back of William Templeton’s book shop. The museum is open on a Wednesday, Friday and Saturday from 2pm – 5pm, from April to September, and then on a Saturday only between October and March. Admission is free – you just need to ring the bell. For more information click here to visit the Museum website